Time for a parade at the TCI Junkanoo Museum 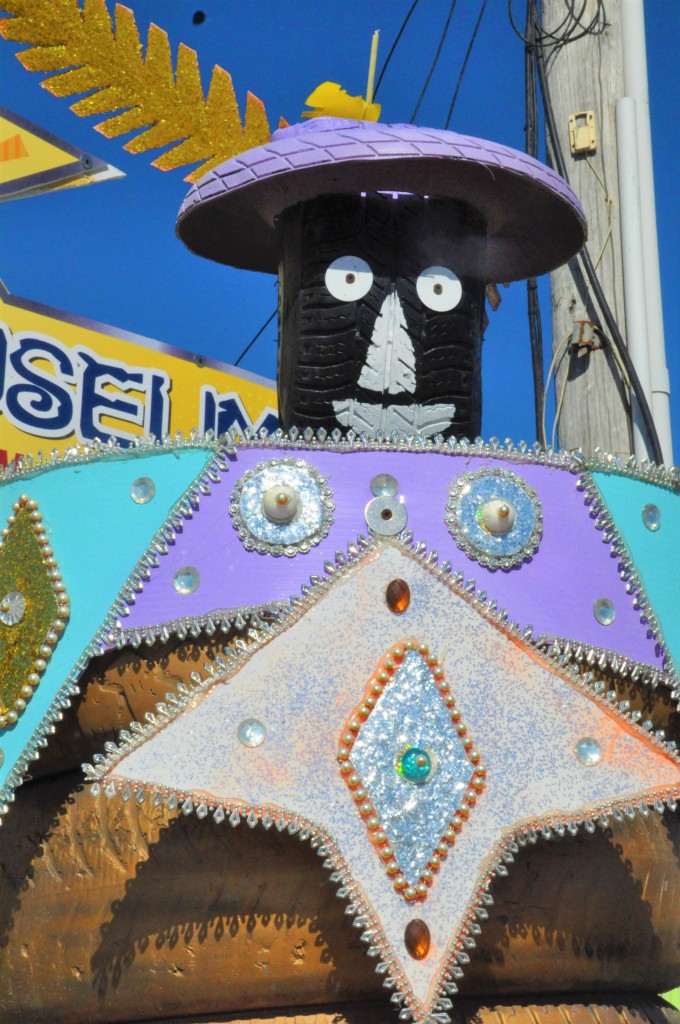 On March 10, 2017 the students of Grade 5 had the opportunity to explore inside the newest TCI museum and try on various Junkanoo costumes. 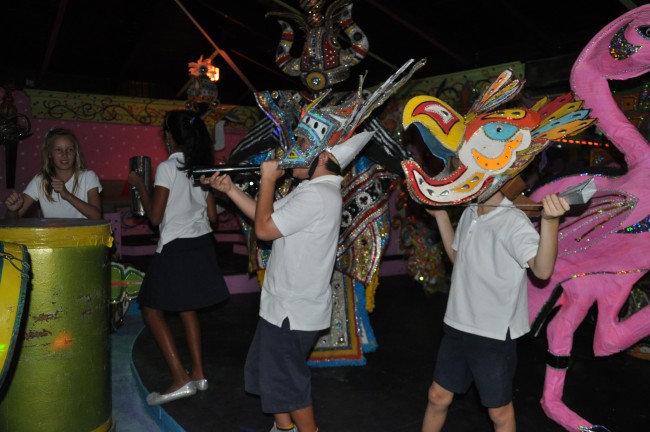 The first ever TCI Junkanoo Museum has recently opened on the island of Providenciales to preserve the heritage and culture of the Turks and Caicos Islands. 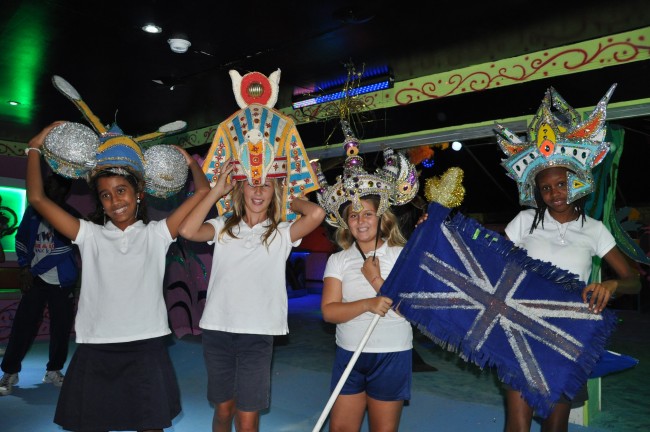 Students were encouraged to take advantage of the information available at the museum, to know their roots and history of the vibrant art form. 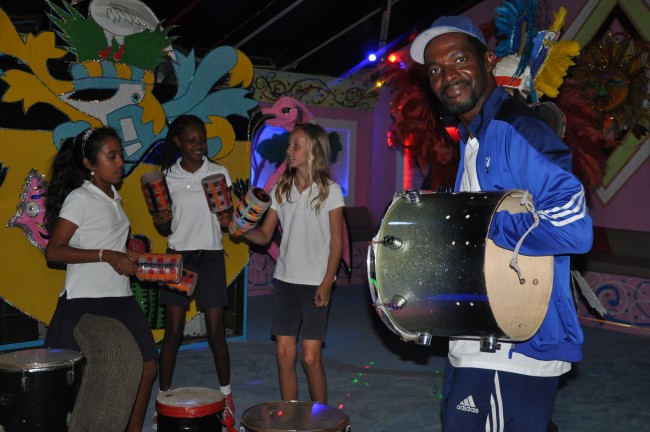 Students were given a brief lesson on playing the Junkanoo drums, along with the opportunity to take photos and document their experiences at the TCI Junkanoo Museum. 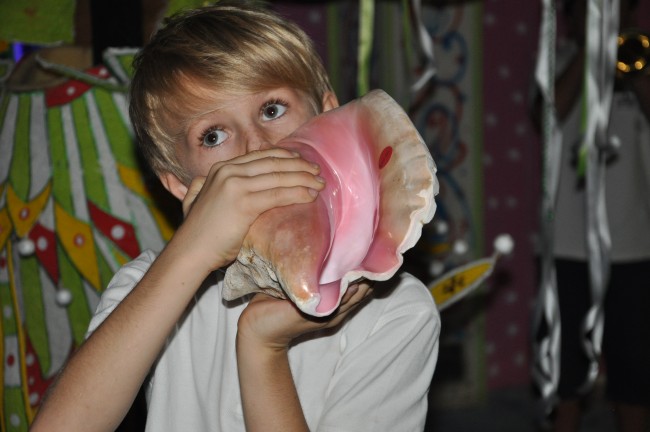 Then an impromptu jam session complete with costumes commenced. The children, teachers and parents all chose an instrument and joined in with the hypnotic rhythm led by Mr. Penn on a large steel drum and created a loud hullabaloo! 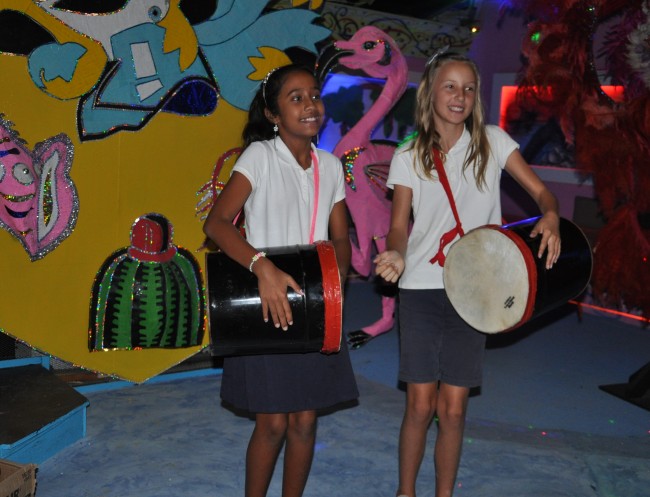 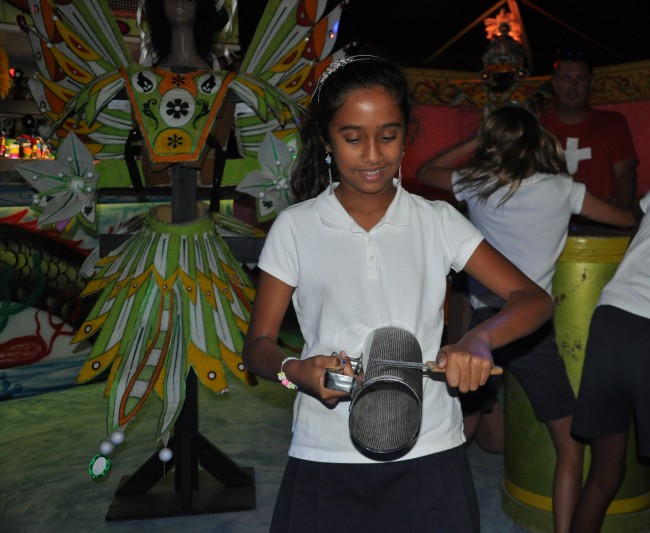 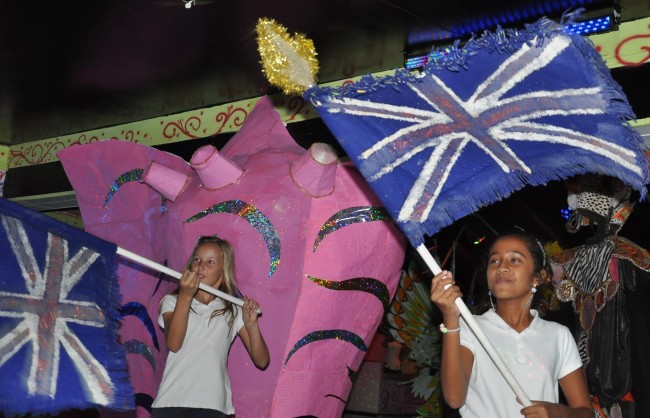 Penn said that the main focus of the TCI Junkanoo Museum is Junkanoo, but it also brings attention to all of TCI’s natural beauty that makes the archipelago unique. 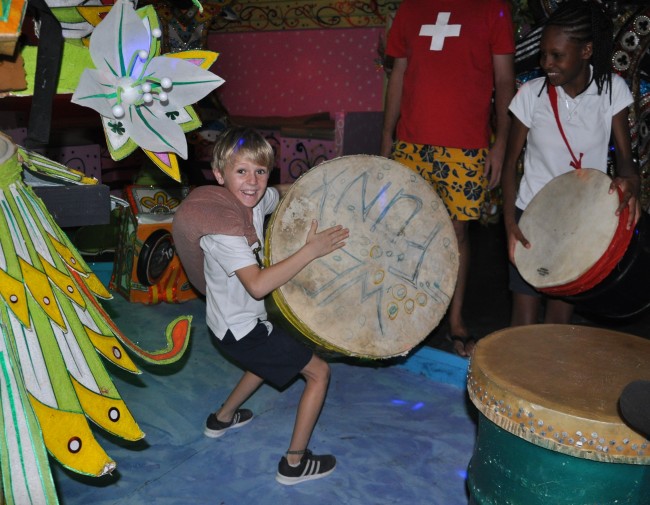 The TCI Junkanoo Museum puts on three shows daily, where visitors and tourists can learn how the costumes and instruments are made. 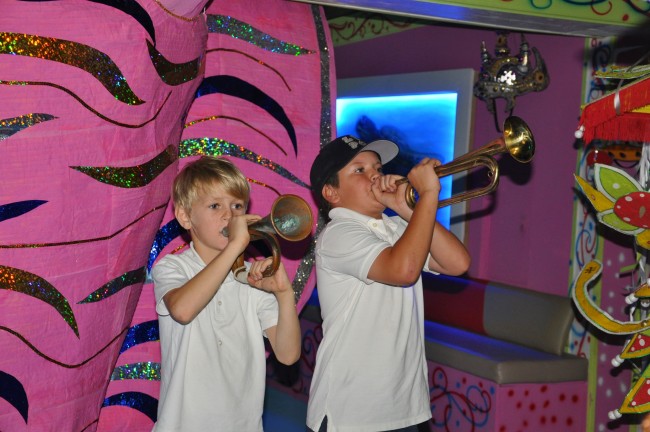 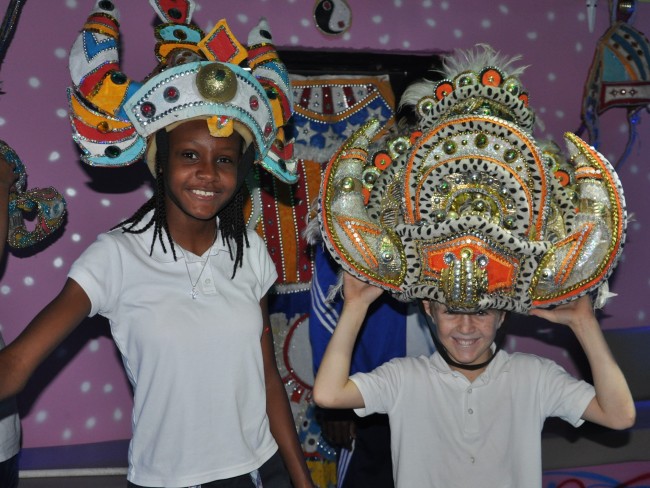 Mr Penn encourages the private and public schools to take advantage of the information available at the TCI Junkanoo Museum, as he says it is vital for the children to know their roots. 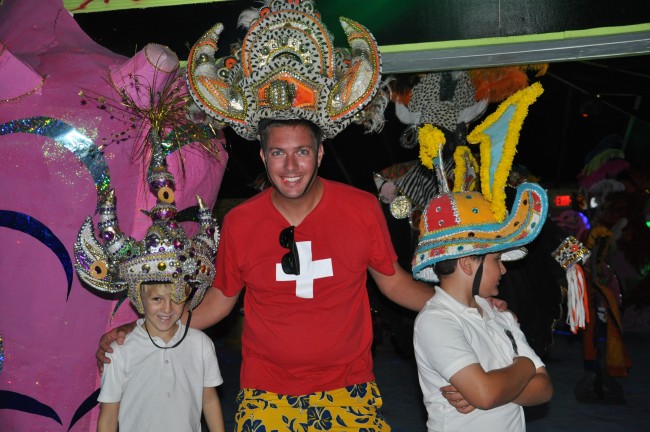 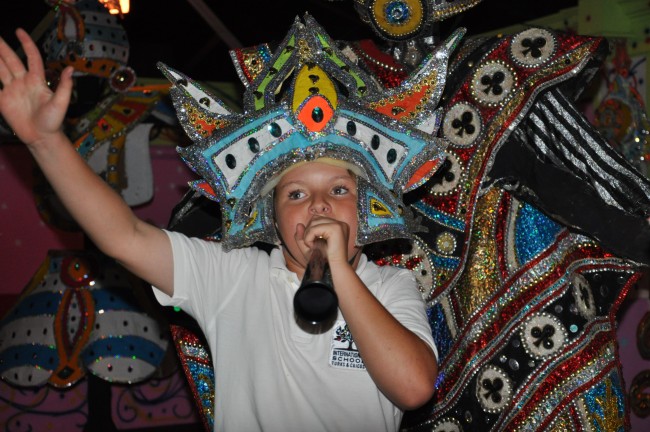 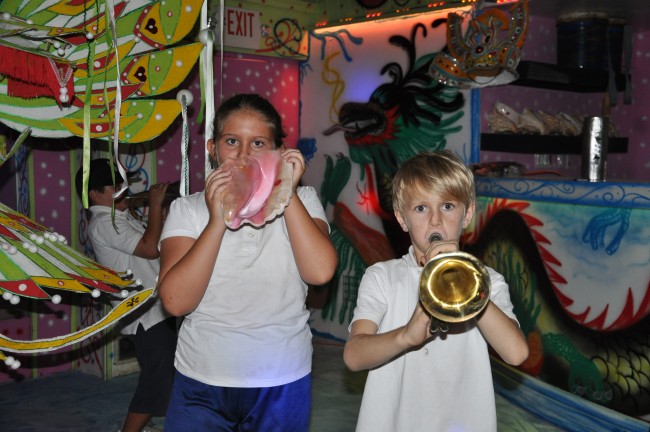 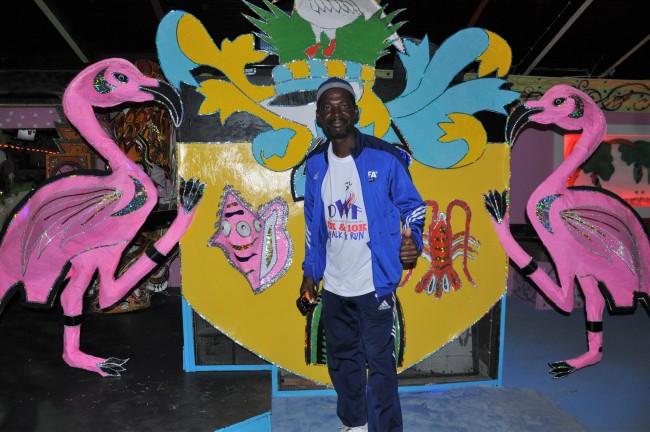 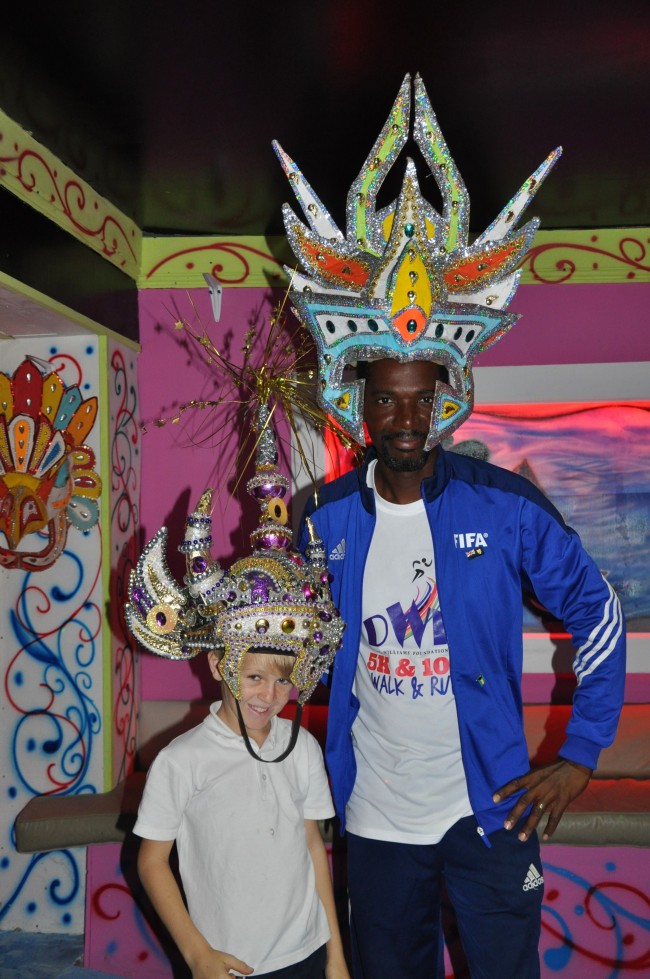 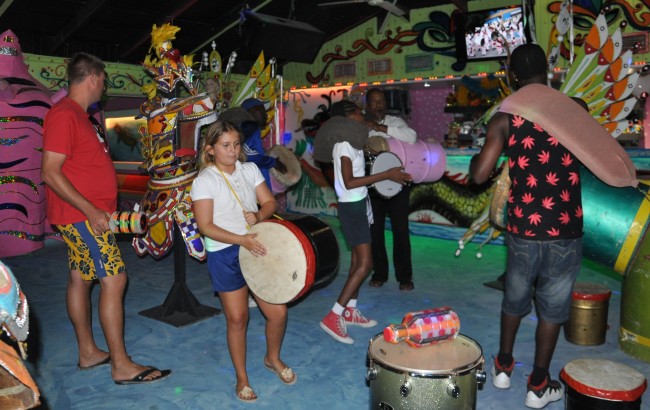 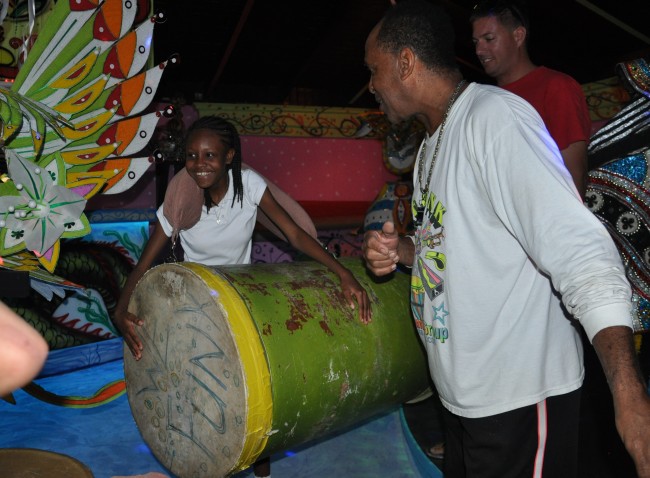 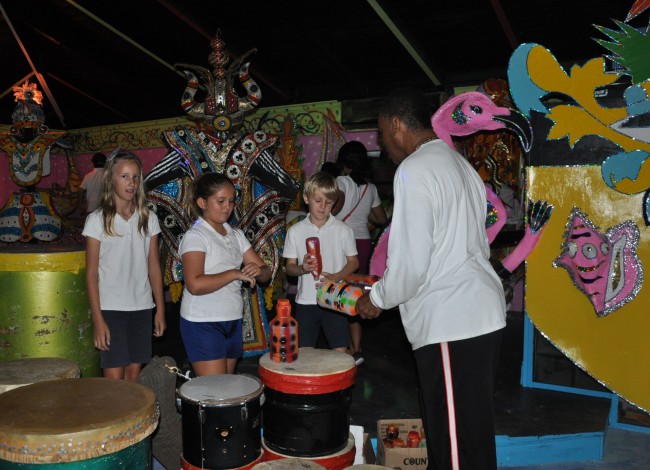 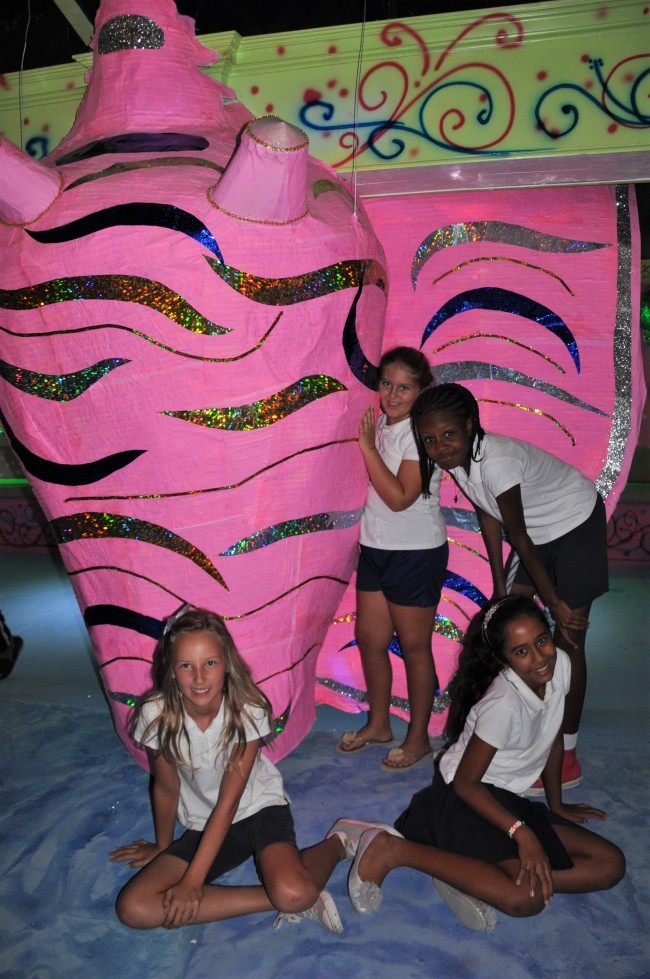 About the TCI Junkanoo Museum

The TCI Junkanoo Museum is coordinated by Kitchener Penn, a well known islander who is head of the We Funk Junkanoo Band.

Penn was hired to put on the first junkanoo festival in the Turks and Caicos in the 1980’s and what he brought to the island was a Bahamian-style festival, based on his own roots as a Bahamian.

The event was one of excitement and pulsating rhythm created by ripsaws (handsaws scraped by hand), drums and percussion. 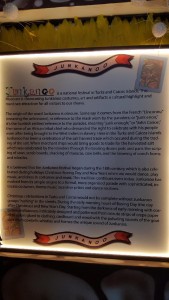 The main instrument featured is the ordinary carpenters handsaw found in any hardware store.
The saw is held with either end in a number of ways to produce a bend in the center of the blade.
A metal scraper, usually a long nail, a fork or knife or a screwdriver, is raked and scraped over the teeth of the saw to produce a unique percussive scraping sound, this action is called “Ripping the Saw”.

Bending the body and ripping the saw in time with the beat of the music produces a wobbled overtone. This gives you the characteristic sound of ripsaw music.