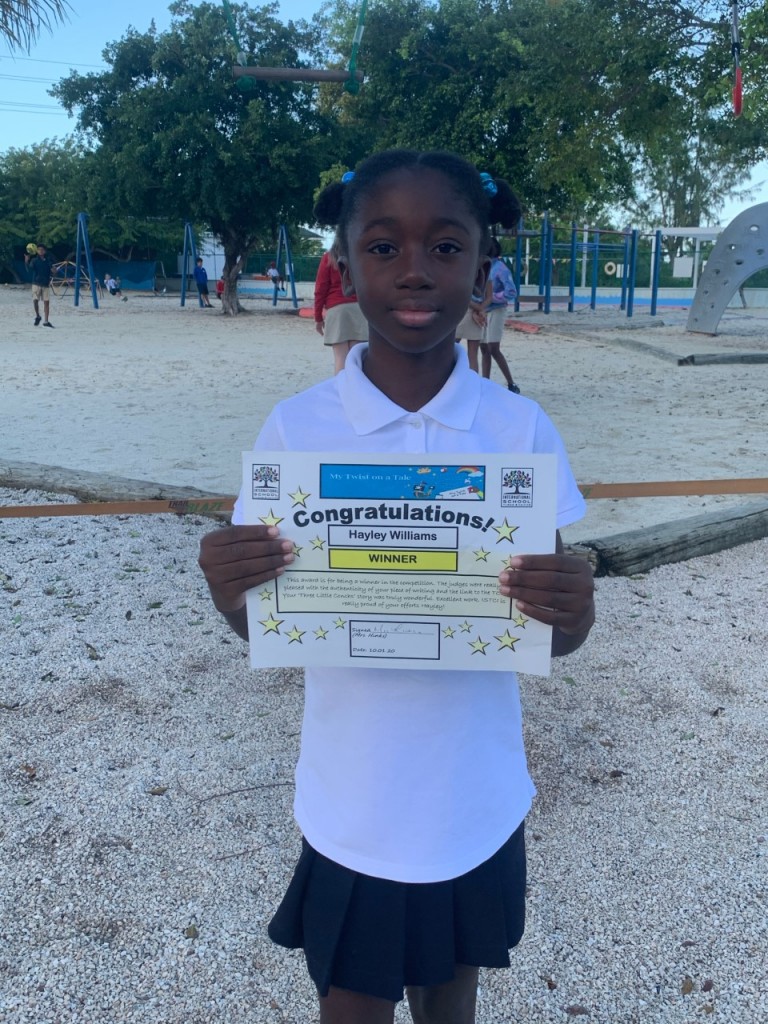 All of the children in upper Key Stage 2 and Middle School took part in a really exciting competition!

It was called ‘Twist on a Tale’, which involved children taking a well-known traditional tale and putting their own twist on it.

This week, we received news that the competition judges were blown away with the authenticity and originality of one of our ISTCI entries – Hayley Williams!

Hayley, who is in Grade 4, will have her story published in the ‘Twist on a Tale’ published book which the school and her family will receive a copy of. As a school, we are extremely proud of Hayley’s efforts! This is a huge achievement and she is now a published author – how exciting!

Annually, in the Beautiful By Nature Islands of Turks and Caicos, in the month of November, there is a Conch Festival that takes place in the community Blue HiIls located in Providenciales. It is an exciting festival where local chefs and restaurants compete for the best and most original tasty conch dishes.

It was conch season and the time was fast approaching for the Conch Festival. Local divers were busy preparing to go diving in order to supply the many local hotels and restaurants that were competing for the tastiest conch dishes.

There were three little conchs, very beautiful and fascinating creatures that lived in the blue waters of spectacular Grace Bay Beach. During the day they live under the sand and in the night they would come out to feed on the surface of the sand. The three little conchs, named King Helmet, Triton Trumpet and Horse Conch were very worried. Yesterday, Queen Conch told them that they may have to leave the comfort of the tropical waters and go to find their own homes. She warned them to be on the lookout for the divers who were busy hunting conchs.

The three little conchs were very sad and decided to go their separate ways, so each find a safe home away from the divers.

The first conch, King Helmet decided to make his home among the seaweeds. Conch Tristan Trumpet found his home under a rock and the third conch, Horse Conch made his home under the coral reefs.

No sooner had the three little conchs sadly parted ways, the divers came diving for conch. They quickly stumbled upon the King Helmet Conch under the seaweeds.

He was taken onboard the boat with many other conchs, most of which had already lost their beautiful shells. The search continued and Triston Trumpet was shaking with fear. Just as he thought he was safe, the divers spotted him under the rock and gently fished him out. He also joined the other conchs on the boat.

By this time, Horse Conch was getting very fearful and worried because he thought he would suffer the same fate as his brothers.

The divers were angry and puffed and scuffed, but there was nothing they could do.They just had to obey the law. The divers soon left to search for conch in other areas and so Horse Conch was spared. He was overjoyed that his life was saved but sad knowing that his brothers were not as lucky. While he lay contented and happy, he thought of all the good times they spent together. Now they were making someone happy by providing a nice meal of stew conch or sizzling conch fritters.

That’s good, thought Horse Conch but I prefer spending my days in the beautiful turquoise waters of Turks and Caicos Islan